Spoilers & News > Manga Show > Why is One Piece so popular in Japan?[Fan's Work]

Why is One Piece so popular in Japan?[Fan's Work]

One Piece Manga is still on going!!! One Piece 651 has been released on Mangahere, and we need One Piece 652 now...

Note: This article is written by Constantin, one of the fans of Mangahere, and we post this for a better communication for our fans or manga lovers, so the points of this article has nothing to do with Mangahere.

One Piece is pretty much the successor to Dragon Ball aka the number one manga in Japan in recent times. And if you ask this question, I am very curious; have you read it yourself? 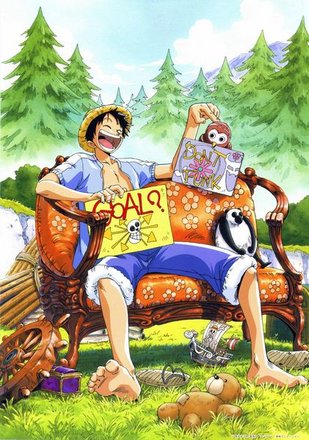 Firstly, there are so many factors as to why One Piece is so popular.

1. Charismatic Protagonist - Luffy is cheerful, friendly and happy-go-lucky. He seems simple most of the time, but he's got incredible luck and intuition. He fights for friends and befriends his enemies (e.g. Mr. 3). He will never give up even when the odds are completely stacked against him. You'll want to be his friend; even better, you want to be him. The list of applications to his pirate crew must be pretty damn long.

2. Charismatic Supporting Characters - All the characters in One Piece have their own distinct personalities, traits and quirks. Just in Luffy's crew alone, you have a badass swordsman, a lustful cook, a cowardly ne'er-do-well, a cuddly deer-monster-man, a money-minded navigator, a cool and mysterious historian, a funky topless cyborg mechanic and a skeleton for a musician. How badass is that? That's only his crew; they meet tons more wonderful and diverse people who are all interesting and completely funny.

3. Wonderful, Fantastic World - The world of One Piece, like its characters, is diverse, unpredictable, and a joy to visit. It's like Alice in Wonderland, except that it's oceans of pirates and marines.

4. They Level Up The Hard Way - The Strawhat Pirates didn't turn into aces overnight. They have to resolve on determination, hard work, teamwork and ingenuity to overcome otherwise impossible enemies and scenarios. Often they get beaten within an inch of their lives. Mostly they already are. You can't help but root for them, unless you're cold-blooded. Or just jaded. Or if they are fighting a really cool enemy, you might want to switch sides for a while.

5. Romance Dawn - Nothing about love between two people. The entire adventure of One Piece is about the Romance Dawn - the heroic quest that sends the protagonist on an epic journey. The One Piece that Luffy (and everyone else) searches for is a real MacGuffin. This story is really about the journey, not the destination, and it's a really epic journey at that.

In short, One Piece is the quintessential shounen manga running at the time of writing. It contains all the essential elements of shounen manga storyteling; it's a Japanese bildungsroman of sorts. You follow the characters as they grow through hardship and happiness, joy and loss. It's often heartwarming and hilarious; sometimes it's heartbreaking. It's just a good story with good characters.

Then, I'd like to say something about  "THE POPULARITY OF ONE PIECE IN JAPAN".

In Feb 2011, popular Japanese TV channel, NHK, conducted a survey on people who read Eiichiro Oda’s super-popular manga series, One Piece. And this was the result of their study. 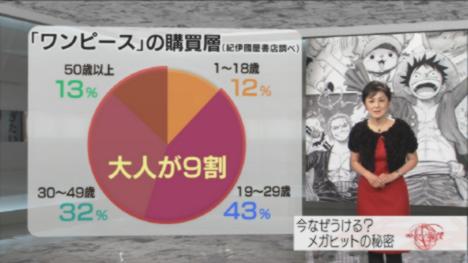 As we can see, 88% (rounded to 90%) of adults in Japan read the manga frequently. The teen demographic appears to not read One Piece or might not care enough to end. Though here in the West, you don’t see too many teenagers read or talk about One Piece. 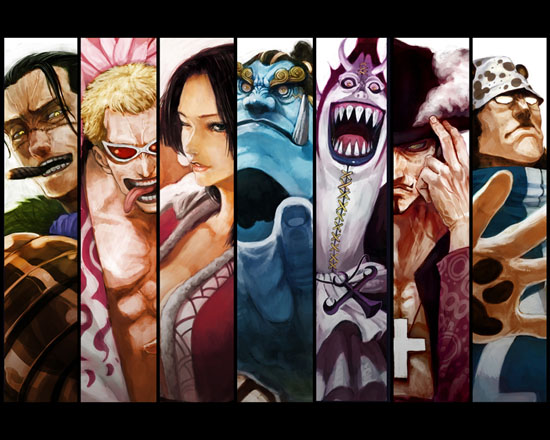 Deep Story Behind The Humor

The story of One Piece is often very humorous. But, it does have some very emotional & sometimes dark moments. Need some good examples? Read the Water 7 (Volumes 34-39) & Impel Down (Volumes 54-56) arcs.

The Straw Hat Pirates are a wacky cast of characters and all diverse. But most importantly, they are a FAMILY. The antagonists of the series are seriously great as well because their behavior doesn’t always reflect their personalities & vice-versa. Mr. Crocodile (a well-known antagonist in One Piece), Buggy the Clown (the first major antagonist), & Aokiji come to mind.

Growing Up With One Piece

One Piece started serialization way back in 1997. Adults in Japan most likely grew up with the series and may have a better appreciation of the stories much more than the younger audience does.

Now, why is that the younger audience might not be reading One Piece (both Japan & also in the West)?

For those who don’t know, American cartoon company, 4Kids, licensed One Piece years ago and heavily edited it to fit the Saturday morning cartoon audience. Unfortunately, this drew the ire of many fans and also scared off potential new fans of it. This has some ramifications to this day as I recently heard a teen say that One Piece is not of her favorite anime series because of the 4Kids localization.

This is probably a huge issue. A few people have told me that the teen market in the U.S. usually loves stories with lots of teen angst & drama. One Piece doesn’t seem to have too many situations like that. It’s sometimes hard for them to relate to certain adult emotions & situations that the One Piece characters have experienced.

Ninjas Are Better Than Pirates

Yes, this might sound a little silly. But, some people take this very seriously. A notable example would be Naruto. It seems to be more popular than One Piece to the younger demographic. You can credit that to the anime being shown on Cartoon Network in the West. Pirates are commonly seen in Western pop culture, while ninjas provide something different, foreign, and unique in the West. You can say the same regarding the idea of “death gods” (shinigami) in BLEACH, another popular series.

Preference of Magazines/Scanlations over Tankobon

There are teens who probably do read One Piece. They’re just not bothering to buy all the volumes or catch up on past material. Kids are either reading copies of Weekly JUMP or reading chapters online. You would figure that with teens craving instant gratification, they might actually go back and read past volumes/chapters. But, there’s the problem of information overload and/or not enough disposable income to buy volumes.

A lot of people can’t seem to get into the art style, both in the anime & manga. Yes, it can be pretty unusual. However, the art style is original and it stands out above a majority of manga titles out there. Not everyone wants all art styles to look the same, right? One’s personality can reflect his/her art style. Oda’s love of pirate comics and wanting to draw what he wanted is probably why the art is the way it is.

One thing you have to wonder is why NHK decided to conduct the survey (even though it’s probably apparent). Was it because of the numerous records the manga has broken in terms of sales? Did they want to show that manga isn’t just for kids? Are they trying to tell Shintaro Ishihara that he shouldn’t regulate One Piece? NHK is an educational channel, after all. 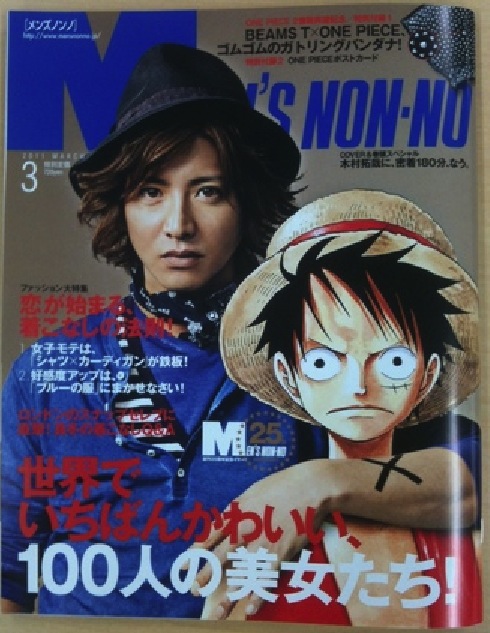 The thing that One Piece does well better than a LOT of series is capture the spirit of adventure, which practically a majority of adults can relate to. The world we live in is full of challenges. We’re not always satisfied with certain things and we try to reach new heights. Everyone’s definition of adventure is different, but we’re all seeking it, in any shape and form. Another point is that One Piece provides a great appreciation for the outdoors, something that is somewhat lost in the post-industrialized world we live in today & something that people should experience because being out in nature teaches us many things about ourselves & the world.

Finally, One Piece teaches us that we should be able to do as we please. Japanese adults are sick and tired of living under supposed “perfect conditions”. In the story, all the main characters are basically wanted criminals by the World Government (a group that defines what is “good” and what is “evil”). They don’t care, because as long as they have each other and keep doing what they believe is right, then things will be fine. I don’t know if it’s just me but I see some real-life One Piece in the recent Egyptian & Tunisian protests.

I did not get into One Piece until after the time-skip and boy, what was I missing. Absolutely hilarious, heartwarming, & very well-written. I was one of the many fans who didn’t like it first, but got into it again after some thought. Guess I’m now part of the club that loves pirates bonding and showing the world how to pursue your dreams & goals. 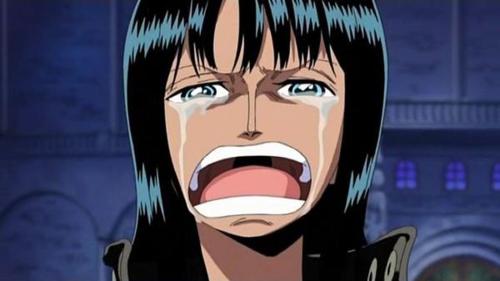